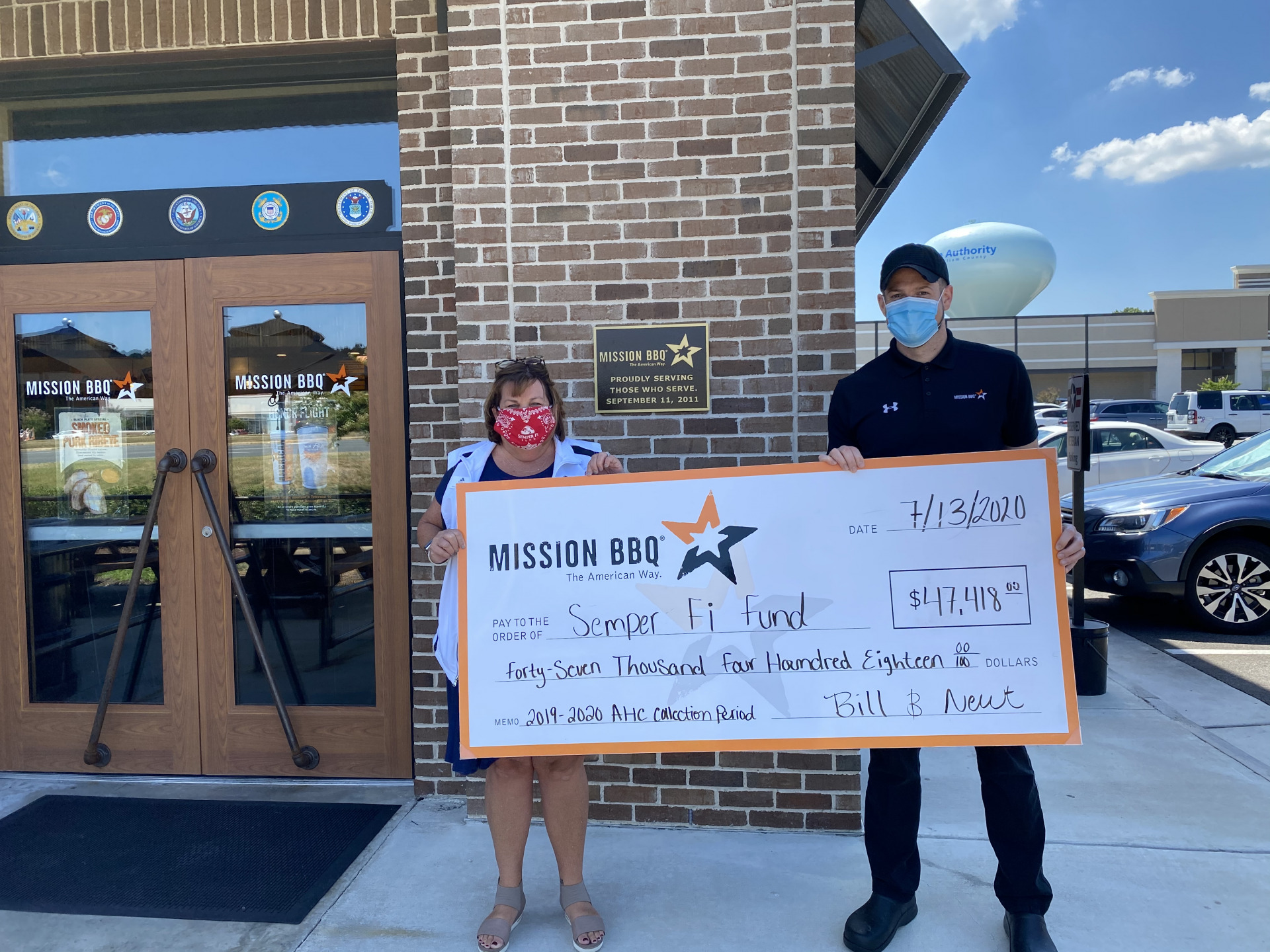 The partnership between the Semper Fi & America’s Fund and MISSION BBQ began in March 2016 and this year’s donation will contribute to a total of over $205,000 for the veteran assistance organization. Co-founders Bill Kraus and Steve Newton could not be prouder to support the national military charity. “It’s our honor and privilege to Serve and Support such a respected and giving organization like the Semper Fi & America’s Fund. Their volunteers, programs, and dedicated efforts have tirelessly supported America’s Heroes,” said Steve Newton.

“MISSION BBQ’S heart, soul, and passion for our Veterans deeply touches all of us at The Semper Fi & America’s Fund. We are blessed to have them with us on our journey to care for those who have sacrificed so much in the service of our Nation. Together, we are accomplishing great things for our wounded, ill, and injured service members from all branches of the armed forces—we cannot wait to see what comes next. Thank you, MISSION BBQ!” said Karen Guenther, President, CEO and Founder of Semper Fi & America’s Fund.

MISSION BBQ opened its doors for business on September 11, 2011, 10 years after the world changed. We believe there is nothing more American than BBQ. And nobody more American than the brave men and women who have sworn to protect and serve Our Communities and Our Country. We do what we do for the love of our soldiers, firefighters, police officers, and first responders—all our loved ones in service. We set across this great land from Texas to Kansas City, the Carolinas to St. Louis…to discover the secrets of great BBQ. Every day we strive to serve you authentic BBQ made from the freshest, most delectable ingredients, and serve it to you in a patriotic dining room filled with tributes to those who’ve made Our Country great, given to us by the people who earned them. Stop by at 12 noon as we sing Our National Anthem. Everyday.

About THE SEMPER & AMERICA’S FI FUND:
The Semper Fi & America’s Fund provides urgently needed resources and lifetime support for combat-wounded, critically ill and catastrophically injured members of the U.S. Armed Forces and their families. Case Managers from the Fund work one-on-one with service members and veterans to understand and support their individual needs right now and throughout their lifetimes. The Fund keeps its overhead extremely low in order to have the greatest impact on the lives of service members and veterans and has been awarded the highest ratings from watchdog groups: A+ from CharityWatch (one of only two veteran nonprofits to receive this rating last year), nine consecutive 4-star ratings from Charity Navigator (an achievement attained by only 3% of rated charities) and the Platinum Seal of Transparency from GuideStar.